Rawalpindi (P.R.) Secretry General Jammat AhleSunnat Pakistan Allama Syed Riaz Hussain Shah has said that Labbaik Ya Rasool Allah S. A. Long March will take its start from Fowara Chowk Rawalpindi and go to Karachi. There will be 150 gatherings of different size in the way and leaders of all political and religious parties, members National and Provincial Assemblies Leaders of traders, Lawyers, and activists from civil society will participate In the Long March. He said, “Chief Justice of Pakistan may take notice of conspiracies against Islam and Pakistan. ” Syed Riaz Hussain Shah said that on 9th of November particularly in Lahore and during whole of the Long March the lovers of Prophet (PBUH) will take oath to be patriot to the Prophet (PBUH) and to be ready for any sacrifice in this regard, he was addressing to a Press Conference in Institute of Islamic Studies in Rawalpindi. Allama Mufti Liaqat Ali, Pir Syed Sajid Sultan Hamdani, Raja Asif Ali Khan and other Leaders attended the Press Conference. Syed Riaz Hussain Shah Categorically stated that he had no political motives, so, the Long March would remain non-political. Long March will be attended by Sahibzada Haji Fazal e Kareem, Pir Afzal Qadri, Syed Hamid Saeed Kazmi, Peer Sultan Fayyaz ul Hassan, Peer Khalid Sultan and Mian Farooq Mustafai. Peer Hussain Shah of Kambal Sharif, Peer of Raani Pur, Peer Sahib of Bhangali Sharif, Pir Naqeeb ur Rehman , Peer Syed Irfan Shah of Rawatra Sharif and several other spiritual Leaders have given their consent to participate in the Long March. The basic Motto of Long March is to call the attention of International institutions, western powers and world Leaders to Legislate blasphemy Laws and to get this Legislation done. Insult of Prophets PUBH should be declared a crime by Legislation at International level. In this regard Muslim Rulers and OIC should play their bold and daring role and should economically boycott the west. Allama Syed Riaz Hussain Shah has stressed that if America and West want peace in the world then they will have to ensure respect of all religions. In this regard insult of religions and Prophets should be declared severe crime. He said that Muslim Rulers should play their role for protection of Honour of our beloved Prophet PBUH without any fear and concentration. He added that Long March would remain completely peaceful and no hinder or restriction in the way of Long March would be tolerated at all. He said that all political and religious parties are being invited for the Long March. 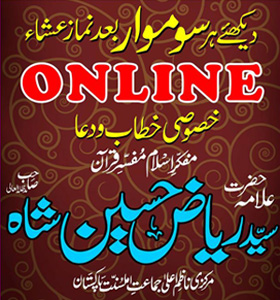 
Drop Down Menus are not visible in some old versions of 'Internet Explorer' & 'Safari'. . . . . You are suggested to use 'Google Chrome' or upgrade your browser for better browsing . . . . .